No History of the Billy Mitchell (Squadron) Chapter would be complete without a brief introduction to the Air Force Association.

Columbus, Ohio was selected as the site for the first AFA national convention on September 15-16, 1947 with U.S. President Dwight D. Eisenhower at the keynote speaker. The focus of this convention was on selecting a name for the organization from among twenty-one names presented. At this time, AFA chapters were known as squadrons with the title, wing commander, or simply, Commander (Cmdr.) rather than the traditional leadership title of president for each squadron.

It is interesting to note that in 1926, General Billy Mitchell (ret. WWI) founded a group known as the Air Force Association headed by Captain Eddie Rickenbacker (ret. WWI). This 1926 AFA organization lasted only a short time due, in large measure, to the fact that there were too few WWI military aviation participants or supporters.

Chartered on June 3, 1947, the Billy Mitchell Squadron, boasts of being one of the first ten chapters in the newly organized AFA. The first wing commander (president) was L.A. Larson of Milwaukee. By May 1948, Wisconsin had two squadrons, one in Milwaukee and the other in Appleton. Later, the national AFA published the names of three charter squadrons in Wisconsin. They are, the Billy Mitchell Squadron (Milwaukee), with Cmdr. L.A. (Duke) Larson; Truax Field Squadron (Madison), with Cmdr. Arlie M. Mucks; and the Des Jardins Squadron (Green Bay), with Cmdr. Arthur E. Norgaard. There was no further published report of a squadron in Appleton. Thus, one may infer that Appleton could have merged with Green Bay. All three squadrons continued to grow in membership and activities to support and preserve this history of aviation.

On Sept. 12, 1918, Col. William Mitchell, US Army Air Service, led a major force of some 1,100 Allied aircraft in a combined arms operation of air and ground forces during the American Expeditionary Force’s attack on the St. Mihiel salient in France under the command of Gen. John J. Pershing. This battle was the debut of the American army fighting as a single unit on European soil. Mitchell was promoted to Brigadier General by order of Pershing in recognition of his command accomplishments during the St. Mihiel offensive and the Meuse Argonne offensive.

After World War I, General Mitchell served in Washington and then became Commander, First Provisional Air Brigade, in 1921. That summer, he led joint Army and Navy demonstration attacks as bombs delivered from aircraft sank several captured German vessels, including the SS Ostfriesland.

His dedication to speaking the truth about airpower led to a court martial trial in 1925. Mitchell was convicted and resigned from the service in February 1926. Before retirement, through personal association and through his writing, he had inspired and encouraged a cadre of younger airmen including future General of the Air Force Henry H. Arnold, Gen. Carl Spaatz, and Lt. Gen. Ira Eaker, who led the two million man Army Air Forces in World War II.

General Mitchell died in 1936, before he could see his conception of airpower vindicated in World War II. One of the pallbearers attending Mitchell’s funeral in Wisconsin was the then-unknown Col. George Catlett Marshall, who had been the Army’s chief ground-force planner of the St. Mihiel offensive.

The Mitchell Institute for Airpower Studies seeks to honor the leadership of General William Mitchell through research and writing on airpower and its role in the security of America.

Billy Mitchell Chapter in Wisconsin in one of the first State/Chapters formed in the Air Force Association on 3 June 1947. Above is a copy of the original charter, although now faded, shows the signature of James Doolittle. Original is displayed at the Mitchell Gallery of Flight at Mitchell Field. 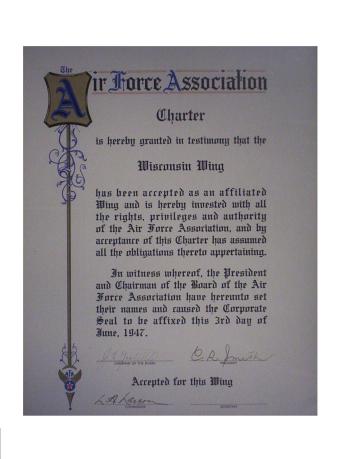